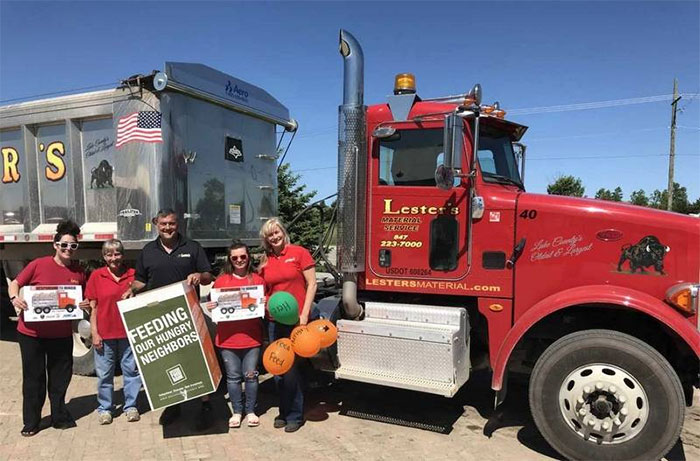 Public works and other agencies across Lake County are asking residents to help fill trucks, but the cargo won't be road salt or other materials.

As community outreach chair for the Lake branch of the public works group, Nick Keller III had the initial task of raising the profile of public works departments and workers in Lake County.

As he began considering possibilities, Keller, who also works for Lester's Material Service Inc. of Grayslake, decided to piggyback the effort with a good cause and began working his contacts.

"Everybody wants to care for people. I knew we needed partners," Keller said.

The result is "Responding to Hunger" food drive, a first-of-its-kind effort from 9 a.m. to noon Tuesday, July 24, at the Lake County Fairgrounds, 1060 E. Peterson Road, Grayslake, the day before the start of the 90th Lake County Fair.

Keller promises it will be the single-largest showcase of public works, township highway and county division of transportation vehicles in Lake County.

As of Wednesday, he said he has secured commitments from 13 communities and expects a dozen more in coming weeks.

"We aim to make this a big public event with fun activities for the entire family," reads promotional material. The event will include Touch-a-Truck that lets kids get a close look and board supersized vehicles.

"In addition to our primary goal of providing food to those in need, this event will provide visibility within the community that public works and the Lake County Sheriff's Office stand together in 'Responding to Hunger,'" reads the promotional material.

While donations of nonperishable goods will be encouraged and accepted on the day of the event, work already is well underway.

Twenty-four food collection boxes have been delivered to various locations, including four in Libertyville, which is making it a competition among village departments. Keller hopes to have 50 collection boxes throughout the county.

"We have a box here at village hall," Round Lake Park Mayor Linda Lucassen said. The village could not have weathered last year's flooding without the efforts of public works, she said.

"They're always there. You call them in the middle of the night, they don't hesitate, they just come," she said.